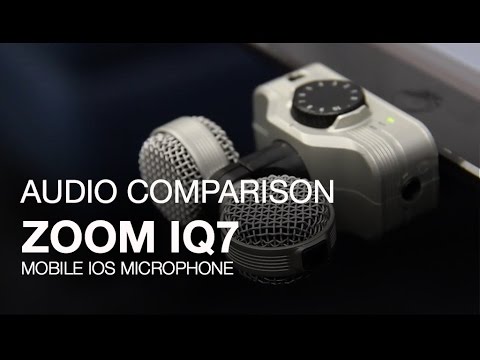 Record high-quality, Mid-Side stereo recordings straight to your iOS device with the Zoom iQ7, a microphone that plugs right into an iOS device thanks to its Lightning connector. With a naturalistic stereo depth of field, the mic is wonderfully suited to music-video recording, video-based podcasts, and more.

The iQ7 records broadcast-quality digital audio, and offers a stereo-width slider to adjust how “wide” you want the resultant recording to feel. The controls for width control and gain are easy to master. Optimized for the Zoom Handy Recorder App, the iQ7 comes with a removable spacer that allows it to be used with most iPhone, iPad, and iPod cases. It also ships with a foam windscreen.

Capture Events Just as They Happen

M/S stereo is beloved in the pro world, for the technique results in a highly realistic recording, both in terms of width and depth. M/S recordings also “fold down” to mono without issue, and this makes them particularly attractive to people who demand mono-compatibility for their stereo recordings. With the iQ7, you can rest assured that your audio will sound equally good, whether its heard on headphones or off a phone’s speaker.

For Horizontal Video, Vertical Video, or Audio Only

Built with a rotating capsule design, the iQ7 mic can align with your camera to capture audio while recording video, or to better suit an audio-only recording. It can also be used to record audio for horizontal or vertical video, delivering perfect left-to-right stereo orientation in the resultant recording. When recording audio without video, simply rotate the mic to the audio position, and point your phone like a mic to the sound you want to record.

The iQ7 records audio at broadcast-quality 48 kHz/16-bit. You’ll have the ability to adjust the stereo width using a slider. The controls are easy to master: a simple gain knob, and the aforementioned stereo-width control. Note the 3.5mm headphone jack as well; this output allows you to monitor audio through headphones while you record, and it can be used as a line out for recording an analog backup recording if desired.

Adjust your input level, with a large front-facing MIC gain knob and LED level meters. Use the headphone jack for monitoring your audio before, during, and after recording.

The mic is designed to work with Zoom’s free Handy Recorder app, available on the iOS store. You’ll be able to monitor audio without latency straight from the app. When it comes to preparing your recording for the outside world, you’ll be able to perform fine editing functions with a waveform display, save your files in either linear PCM or AAC file formats, and apply effects such as compression, EQ, and reverb to further enhance the sound. Share your resulting files over email, or post them to SoundCloud for the world to hear. 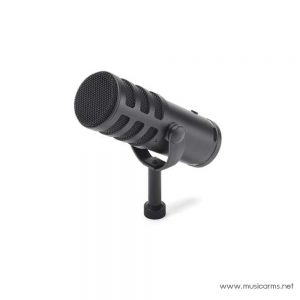 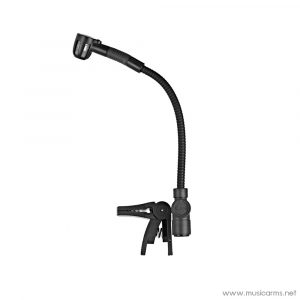